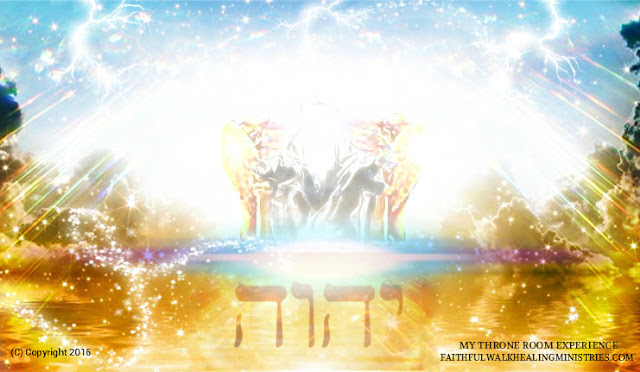 On August 27, 2014, after being caught up in the spirit, I found myself in a place full of rolling green hills. The grass under my feet was soft, almost like feathers. From a distance, I saw people walking towards me. They were scattered amidst, some walking in pairs, while in conversation with one another, and others were walking alone. No one seemed to be in a hurry, yet they were focused, as if they knew their exact destination. The people varied in age, stature, and gender, and they all were dressed in simple, white robes. Each one of their faces radiated with gentleness and peace.

I watched for some time as the people randomly walked pass me. No one looked at me, or even stopped to speak to me. It was as though I was invisible to them. Then my eyes fixed on a particular man who was walking right towards me. He was tall, about six feet in height. He looked to be no more than thirty years of age. His eyes fixed with mine, and I immediately knew that he could see me.

I thought to myself, I will ask him about this place. Considering that I had no idea where I was at.

As the man got within a few feet of me, I opened my mouth and said, "Excuse me sir. Can you tell me where you are from?" I was taken back by my own question. I placed my hand to cover my mouth. This was not what I meant to ask him!

The man stopped right in front of me, smiled graciously and asked, "Do you know the story of Nineveh?"

"Yes, of course! I responded. You're talking about the book of Jonah."

"Yes..." the man continued while nodding his head. "Then you know that many repented, and that the city was spared. Well...I'm one of those people!" The man then smiled, as if to say good-bye, and walked right pass me.

A sudden, overwhelming feeling came over me. I could joke and say it was one of those Dorothy wasn't in Kansas anymore kind of feelings. I then realized that no one was walking in the direction I was facing. I slowly turned around to see where everyone was headed.

As soon as I turned around, I found myself in what I can only explain as a great hall. Words cannot begin to capture the magnificence of this place. It was massive. My eyes began to scan the room. It was the most beautiful place I had ever seen. The floor was made of what I can only describe as pure diamond; the most clear, flawless diamond you've ever seen. Sitting in the center of the room were four creatures made of fire. I could not make out their features because the fire came from their very beings. It was a holy fire.

The hall continued to fill with people as they took form in a half circular position; to my left, right, and behind me. Everyone was dressed in white robes. There were hundreds of people there. They were all standing as if waiting for someone. Suddenly, a voice of a woman spoke from behind me and said, "He has arrived."

I looked ahead, and to my amazement, I saw a large golden throne, with several smaller thrones to the left and right of it. Upon each of the smaller thrones sat a man, mature in age. They all had long white beards and white hair. Great wisdom radiated from their faces in a form of light. They too, were dressed in long white robes that touched the floor. My eyes studied the ancient ones as I looked from right to left. I did not count them, but somehow knew there was an even number of them on each side; twelve.

I then looked towards the majestic throne in the center. There was a great light illuminating from the center on this throne. The center of this light was piercing white, and it enveloped the area of the thrones. From that point out, the next layer of light was golden in color. It spread out the furthest; for miles it seemed. The the final outer realm was a sky blue. It was the smallest in width. The light that came from the throne filled the entire place and beyond; it was the source of all light.

From the center of the throne was the outline of what appeared to be a man, great in stature. The light that radiated from His core only allowed one to see the silhouette of His form. But I knew who He was; The Ancient of Days.

I could see His hands firmly positioned on the arms of the throne. I saw what I perceived to be white hair that rested on His shoulders. His robe, made of light, contained the universe, as it draped gracefully across the floor. Flickers of lights dashed in and out from His being.

Again, a voice came from behind me. This time is was that of a man. He placed his hand gently on my right shoulder. I never turned around to see who he was.

"Go forth" the man said softly.

I began to walk slowly towards the throne. Though it was big, it seemed forever away. After an amount of time, I arrived at the outer realm of the golden light. The light itself seemed to be alive. I slowly reached out my hand as if to touch it. Immediately, currents of light began to come from the One on the throne. Wave after wave hit my body. My body began thrusting backwards, but I never lost my footing. The light searched every corner of my being. I felt naked; transparent, yet covered at the same time. .

This must be the power of God! I thought to myself. But within a split second of my thought, I was corrected, as if someone was reading my mind. "No, it is Love" a voice said.

The sensation that I felt, I can only explain was like oil running through my veins. It burned my core. Yet, I felt like an only child, like the only one in the world He loved, and I longed for more.

A song began to play. The music came from the very air itself. It was the most beautiful music I had ever heard. I broke out in a dance. I can only describe the movements as that of a cross between ballet, and what I've seen as praise dancing in churches. I danced across the diamond floor, as the crowd watched.

When the song ended, I found myself prostrated before the throne, face down. I began thanking the Lord for all He had done, all He had delivered me out of, and all He had changed and purified in my life. I don't know how long I laid there. There is no measurement of time in heaven, but when I thought I had laid there long enough, I lifted up my head and found myself sitting at a bus stop, with people surrounding me, asking where did I just come from...

Email ThisBlogThis!Share to TwitterShare to FacebookShare to Pinterest
Home